PRE-SCHOOL – ON THE FARM

Previous Next
PRE-SCHOOL – ON THE FARM

Welcome to all our preschoolers! Learning about farm animals is not only fun, but fascinating too!  Hope you enjoy what we’ve put together for you! Jessica woke with the sound of Red, the farm’s rooster, crowing. She smiled. “Today was going to be an excellent day”, she thought. She pulled on her shorts and T-shirt and ran down the stairs. Her mom greeted her as she walked in the kitchen. Mom was kneading the bread dough. “The list of things I need for our breakfast is on the fridge, thank you Jessica!”

Because Jessica was only 5 years old and couldn’t read yet, her mom made a list with pictures. On the list was

As Jessica collected each item, she would tick off the box with her pencil.

First, she went to the chicken coup to collect the eggs. But when she looked inside, she didn’t find any eggs! “I wonder why the chickens didn’t lay any eggs today?” thought Jessica. “Maybe if I bring them some wool for their nests, it will make them feel cosier and more comfortable and they’ll lay eggs.” So she set off for the sheep pasture to gather the sheep for shearing. But as she came near the fence, she saw that the sheep were very far out that morning.  On the far side of the pasture. She decided to saddle her pony, Bolt, so that she would be able to reach the sheep sooner. So, she went to the stables. But this morning, Bolt was not in a cheerful mood. He was stomping his hooves and whinnying loudly! “What’s wrong boy?” asked Jessica. “Would you like me to bring you an apple?” Bolt’s ears perked up! Jessica decided to go fetch him an apple before she rode him out to pasture. She ran to the apple orchard but was in such a hurry that she didn’t see, Purr, the cat, lying in the shade and stepped on her tail! Purr screeched and jumped high in the sky! She landed in Jessica’s arms. “O you poor kitty! I’m so sorry I stood on your tail! Let me fetch you some milk.” Jessica laid Purr down in the shade of the tree and ran to the dairy to fetch milk from the cow. “This day is not going so well.” She thought. She looked at her list. All the tick boxes were still empty.

More bad news met her at the dairy. Bessy had not produced much milk this morning. The farm worker suggested that Jessica fetched some honey for Bessy. She always produced lots of milk when she had licked some honey!

Jessica looked up at the sky. The sun was already halfway up to the top of the barn. She had better hurry! When she arrived at the beehives, the bee keeper smiled and handed her two jars of honey. “Lots of honey this morning Jessica!” Jessica smiled, relieved. Finally, some good news! She ticked the box next to the picture of honey on her list.

She carried the two jars to the dairy. There she scooped up a spoon of honey and put it on the beam in front of Bessy.  Bessy licked it up greedily. The farmhand started milking her and smiled as the milk gushed out! Soon, he handed her a 2 litre jug of milk. She put it in her backpack with the jars of honey and ticked the box next to the picture of milk.

Then Jessica walked over to the apple orchard and put 5 apples in her backpack. She ticked off the box next to the apples on her list.

She took an apple to her pony, Bolt. He was so happy to see her, or perhaps happier to see the apple she held out to him! He gobbled it up! The stable hand lifted Jessica onto his back and she trotted towards the sheep on the far side of the pasture.

She gathered the sheep by riding around them and calling for them to head to the barn. They soon got the idea and bleated all the way to the barn. As soon as the sheep shearer had shorn one sheep, he handed the wool to Jessica. She loved the feel of the soft wool in her hands. She put it in her backpack and ticked it on her list.

What was left? Can you tell?

After Jessica had left Bolt back in his stable, she headed for the chicken coup.   She put some soft wool down for the chickens. She saw that they had each laid an egg already! As she packed them in an egg carton, she counted, 1, 2, 3, 4, 5, 6! A full carton meant six eggs!

Jessica walked carefully back to her house. As she opened the door, the smell of fresh bread greeted her. Her whole family was sitting at the table waiting just for her. She put the eggs down on the table. “Thanks for the eggs Sweetheart!” said her dad. She opened her backpack and took out the wool. “Thanks for the wool Sugarplum” said her Grandma. As she packed out the honey, her baby brother said, “Yum, Yum!” Mom said she was going to bake a delicious apple tart with the apples. Mom poured Jessica a big glass of milk which she drank on the spot! Jessica felt so pleased that she had got each item on the list!

Some questions to discuss with your child:

Janet Kieswetter and her husband Timothy have 5 daughters and live in Pretoria. Janet has been homeschooling her daughters for 5 years and loving it! They follow the eclectic approach. If you would like to follow their journey on Facebook, search Kieswetter Klaskamer or read Janet’s blog www.kieswetterklaskamer.wordpress.com

Pigs like to roll around in the mud.  This helps them to keep cool.  People think pigs are dirty, but they are quite clean!  Pigs enjoy being around people and enjoy a scratch on their tummy or a rub behind their ear.  Next time you see a pig – give it a little tickle and make it happy!

eep live in groups called flocks.  Even though they all look the same, they can recognize one another.  A sheep’s  woolly  coat is called fleece.  The fleece is shaved off (called ‘sheared’) and made into wool so we  can knit our  jerseys!   Remember, if you ever shear a sheep, it must be done in one piece!

Cows have a super strong sense of smell and can smell scents from as far as 10km away.  Cows are not always tired or lazy when they lay down.  They sometimes do this when a storm is close by.   Cows are like pets – you can give them a name.  They can learn their name and come when you call them!

Horses can sleep standing up or lying down.  They have bigger eyes than any mammal on land.  Horses like to eat hay and grass.  They also like peas, beans, apples and don’t forget carrots!  Horses are strong animals.  So strong that people like you and me can ride on their backs!

Time to make your own healthy snack!

Tortilla or any chips of your choice broken into triangles

Raisins (cut in half or left as is) 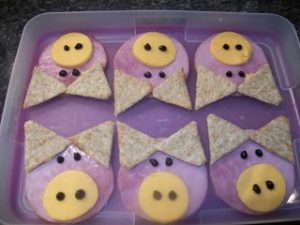