A History of Education Part 2: he who swings the stick

Previous Next
A History of Education Part 2: he who swings the stick

It looks like this German school master was quite proud of his work. We don’t know who he was; we just have the records. But, as promised in Part 1, we are going to leave the industrial age methods, just for now, and travel back to Ancient Greece.

Now, it’s not to say that the Greek masters did not, in fact, punish the kids. The general thought was that hitting the students with sticks made them learn faster. What it did, though, was make the children terrified of school, and rightly so. Nothing like a little caning first thing in the morning to make a child look forward to exams, right?

So did everyone go to school?

Schools in Greece were small, with only one teacher and between ten and twenty boys. That’s right, boys. Girls, to begin with, stayed with their mothers until they were married, either at home or working in the fields. Slaves, also, did not go to school. Many children in ancient Athens and Corinth – amongst other Greek cities – were enslaved. Some of the slaves did, in fact, learn to read and write, though this was mostly up to their master and only because they were expected to help grow or run the family business, or write letters for them, or assist with the family accounts.

Unfortunately, poor children also did not go to schools. The fee for the master would often be pretty expensive and, besides, the family needed the boy’s work in the home. Poor boys would, for the most part, work in the fields, planting and weeding, or work as apprentices in shops, learning to cut hair or make shoes. Some herded sheep or cattle.

The bottom line is that there were no public schools, not in the sense we know them today. If you were a girl, a slave, or poor…well, you learned what you could, when you could, and where you could.

My high school was, like most high schools, a series of large buildings, bricked and grassed-in quads, large playing fields, high fences, and harassed administrators. Sometimes I think I contributed to the feeling of harassment and, if my school record is anything to go by, I may have been responsible for at least 10 to 12 grey hairs per educator. Greek schools, on the other hand, had none of this. Oh, we see movies with elaborate sets, white-frocked and long-bearded guys holding forth amongst high columns, overlooking grand bays and blue waters but, in reality, “school” was mostly a small, rented storefront or – in the worst case scenario – under a tree.

The boys sat on wooden benches, with no desks, and the master would have his chair. In those days, people thought that only dignified grown-ups should have backs to their chairs. The boys would typically start school at about 7 years of age. It wasn’t done, the prevailing thought was, to waste school on younger children, as they were prone to dying anyway, from dysentery or malaria. Boys would usually continue schooling until about the age of 13.

There were also no school holidays. Don’t even try stay out of school. There were often no weekends either. You could be expected to stay off on religious festival days, but that was as far as it went.

What did they learn in Greek schools? 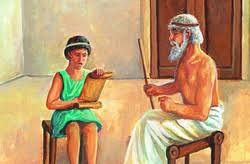 Reading, writing, some more reading, and then some more writing. That was the staple of Greek school life. The grand visions we have of long-haired philosophers imparting their wisdom? Not so much. Oh sure, the boys learned from Homer’s Iliad, and Odyssey, but this was rote learning – mere memorisation – and a word wrong would be rewarded with the cane. Once you had finished learning your lines for the day, you went to the master and recited. If you got them right you would often be rewarded with more lines to learn. If you got them wrong, you were often rewarded with the stick – and then more lines to learn. Sounds like such fun!

Other subjects, after a period, included astronomy and even some geometry. Perhaps, some archaeologists suggest, they even had the use of an abacus in school (which is like sneaking a calculator into a Grade 5 exam). Boys would learn to play the lyre (called a kithara), and the pipes, or the aulos.

Oh, and there was sport as well. They would have to go to another teacher for that, and practice athletics. Their coach would carry a stick. Adrian is a full-time writer and editor, and homeschool dad of two. He struggles to teach maths, though he jealously guards subjects like history and geo-politics, keeping those for himself. He practices Brazilian Jiu-Jitsu and coaches junior baseball which means that, at his age, he longer has a left knee or a right knee, only a good knee and a bad knee. He writes extensively, both for himself and in the corporate world, enjoying clients from across South Africa and as far afield as Sub-Saharan Africa, the US, UK, Middle-East and Australia. His clients include small and medium businesses, Blue Chip financial giants, multi-nationals and the occasional cartoonist. he is the author of the Rudi and Raven Series for middle-grade readers, and also writes for adults as a way to make sense of his own world.